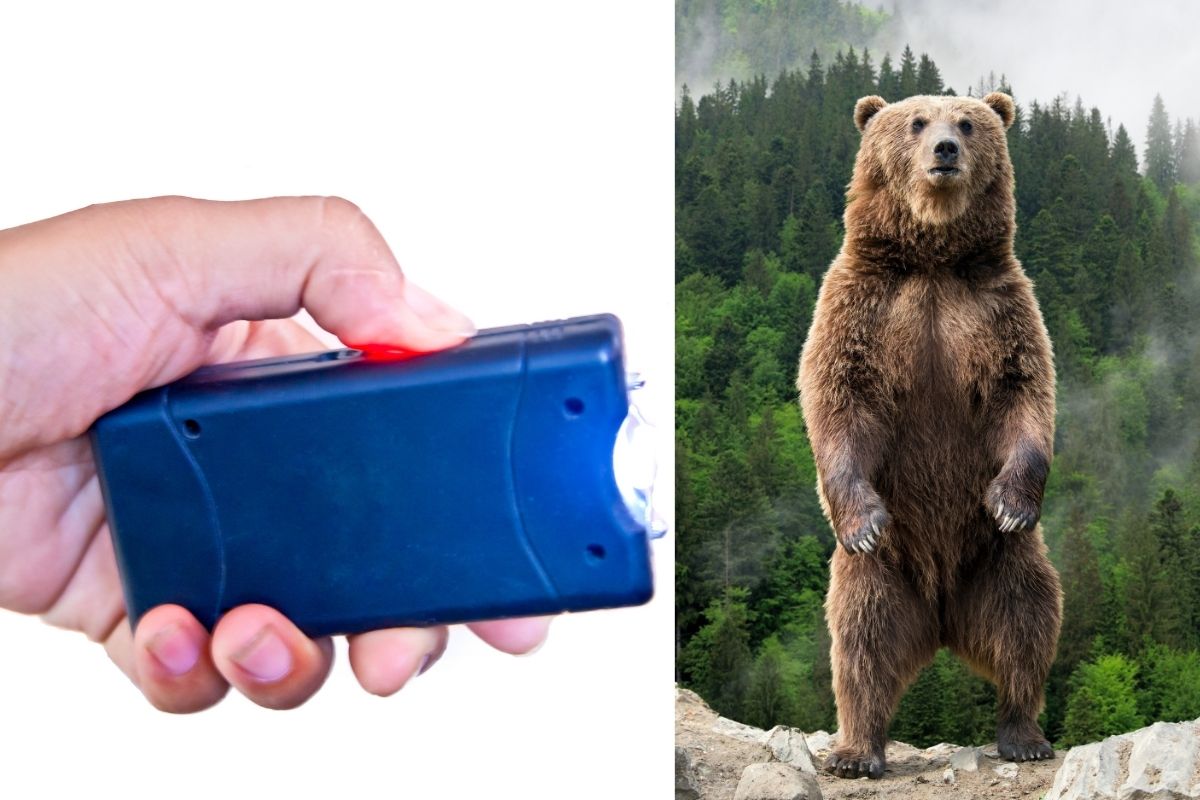 If you are a frequent camper who enjoys visiting the woods, you might be looking for the most effective weapon to keep yourself safe from the wild bears. You might be wondering: can a stun gun stop a bear? However, it’s not the only weapon people tend to use to prevent bear attacks. There are also tasers, guns, and special weapons designed specifically for wild animals.

According to popular belief, stun guns can be used to try to stop a bear. But it is not going to be that effective in stopping it. The major reasons for this are the distance between you and the bear and the thickness of the fur on the bear’s skin. These factors, among others, will almost certainly render your stun gun ineffective against the bear.

But a stun gun is not the end of the conversation. How else can you save yourself from bears? There are a handful of other options that you can try once you encounter a bear. Keep on reading to find out!

How Effective Are Weapons And Other Action Against Bears?

A lot of weapons are good to use in the event of a bear attack. Guns, sprays, air horns, and even bare hands are popular. But are they all effective against the bears? It can depend on the size of the animals as well as the weapon itself. There is a lot to explore to learn how good these weapons might be.

A stun gun is a weapon that delivers electroshock when it comes into direct contact with the object you use it on. People tend to use stun guns on other people to neutralize them. The same tactic may not work on a bear. The main issue is the distance. There is a high chance you will not be attacking the bear from a close distance. And at a longer distance, the stun gun will not work.

Another reason is the stun gun’s shock level. Keep in mind that the body mass of a wild bear tends to be a lot more than a human. Even if you do end up shooting a bear with your stun gun, chances are it will work momentarily. And in the next second, the bear may attack and injure you.

The highest effect a stun gun can have on a bear upon contact is some physical irritation. Therefore, the stun gun may not be your best choice to protect yourself.

A taser is also an electroshock weapon that works when it comes to attacking from a long distance. A good electric taser can shoot electricity up to 35 feet away from where you use it. The metal endings shoot out and stick to the target to deliver a shock. It might seem like the taser might be a good alternative to stunning guns. Unfortunately, it also has more downsides than benefits.

The main downside here is the thickness of the bear’s fur and skin. Yes, the distance is an advantage, but it will not count if it cannot touch the skin. The shock will barely hurt the bear, and it might make the situation worse.

Air horns with high-pitched sound are effective at scaring animals away, but how effective are they in preventing bear attacks? Not very much. This is due to the fact that loud noise tends to irritate wild bears more.

As a result, blowing an air horn may attract the bear to you rather than prevent it from attacking. So, avoid using an air horn on bears unless they are very far away.

Guns are extremely effective against bears if you know how to use them correctly. There are a couple of options when it comes to using guns on bears. What should you use? And how can you stop the bear from attacking you?

If a bear is quickly approaching, you would need to aim your gun quickly. The spot you should aim for is the spot right below the bear’s chin. If that is a hard target for you, you can try to shoot it right behind its front legs. There is a chance it will scare the bear away or hit it in a spot to make it immobile.

The head might seem like the safest target to shoot at. Unfortunately, that is not going to help either. A headshot is already going to be hard to manage because of the moving target. On top of that, a bear’s skull is thick and strong. So the chance that your bullet penetrates its skull is very low.

Bear sprays are an effective method to stop a bear from attacking you. This is not only because it can keep you safe from a distance, but also because the bear will not be harmed because of it. Research shows that proper usage of bear spray can stop 92% of cases of a bear’s undesirable behavior. And 98% of the people that used the spray escaped without injuries.

When you use bear spray, hold the spray with two hands. Have one hand on the trigger and the other on the can. When the bear is within 30 feet of where you are, aim a bit downwards. And then spray the entire can in a zigzag pattern so there is a cloud between you and the bear.

How Can You Prevent Bear Attacks?

To prevent bears from attacking you when you are in the woods, you have to be mindful of a few things. This means staying in groups, not having any visible food, avoiding bear-prone trails, and being prepared.

When you are hiking or walking along a path that might have bears around it, stay in groups. It is more likely for a bear to attack when they see a person on their own. Bears are generally scared of larger groups and will avoid them.

Store Away Food And Bear-prone Paths

Food is an invitation to a bear around you. If you are going to be consuming food in an area where there are bears, make sure to keep it all tucked away once you are done. Visible food will draw bears to you in camps or if there is a lot of open space for the bear to see.

This is kind of obvious, but try to keep away from bear-prone paths. When walking or moving on a trail like this, make sure to avoid any path that you see a bear on. And if you see one approaching, slowly change your route or go back so there is no contact.

Be Prepared To Act During An Encounter

Before you head out to a place with bears, make sure you have all the things with you that will help during an attack. Another thing that helps is knowing how to act when a bear is approaching. For example, laying on the ground and playing dead can fool a grizzly bear into thinking you are not worth attacking.

Carrying bear spray is a must. And make sure to wear clothing that is visible to humans from a long way out. This will make sure that you are found if you get badly injured.

A fast-approaching bear is a deathly fear for many people. With this in mind, hopefully, you have your answer to the question: can a stun gun stop a bear? Make sure to take all the necessary preparations when you head to a bear-prone path. Stay safe!

Ask people around you if they are prepared for survival mode, and most of them will laugh, saying there is no need for that. But considering all the unpredictable things happening around, it is...

Continue Reading
link to How To Build A Permanent Shelter In The Wilderness?

Everyone dreams of having a place in the wilderness once in a while. If you love camping and going outdoors, you are well aware of how important it is to have a shelter. Extreme climate conditions...

As a former soldier in the United States Army and also a survival hobbyist I've invested a lot of time and money into field testing equipment and teaching others how to use the skills I have attained over the years. People kept asking me how I knew all this stuff and telling me that I should write a book, so I decided to create this website.